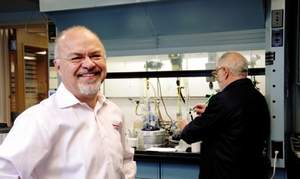 Luis B. Marrero, president of Spectra Colors, says he sees New Jersey as a perfect location for his business because of its “great port, where we can ship anything in three or four days to any country in the world.”

Exports are fueling the growth of the small Kearny dye manufacturer Spectra Colors, which does business in 30 countries by taking full advantage of help the U.S. government provides to small businesses seeking buyers overseas.

Sales have risen 10 percent a year for the past three years, to about $10 million, said President Luis B. Marrero, who has been named the 2011 Small Business Exporter of the Year for New Jersey by the U.S. Small Business Administration.

“We have gone on trade missions to Poland, Turkey, Mexico and Brazil,” organized by the U.S. Commerce Department, Marrero said. “Wherever we think our products can sell well, they have found us distributors and agents to sell our products in those countries.”

Joel Reynoso, director of the northern New Jersey export assistance center office of the Commerce Department called Spectra, “a great example of a small New Jersey company that has been able to grow through exporting.” He said his office has been working with Marrero for years, helping him find agents overseas and supplying him with research on foreign markets.

A key reason for Marrero’s success is that he saw the value of traveling to other countries “and meeting face-to-face with potential partners to establish trust,” Reynoso said. “Traveling overseas and meeting with people gives (Spectra) an advantage.”  Marrero is seen also as a role model and mentor who works with the Commerce Department’s District Export Council, which arranges forums where Marrero speaks to other businesses about the pitfalls and rewards of exporting. What companies like Spectra have discovered is that while the U.S. economy is seeing modest growth, “countries in Latin America and Asia are expanding, and they are open to talking to new suppliers,” Reynoso said. President Barack Obama has set a goal of doubling U.S. exports in five years, “and we are the agency that leads that on the ground,” Reynoso said.

Marrero co-founded the company in 1987, and has been exporting to China for 12 years. Exports account for about a quarter of his sales, and Marrero said New Jersey is a good location for his company, with its “great port, where we can ship anything in three or four days to any country in the world.”
Spectra also sells to major U.S. companies like the art supply firms Crayola and Sanford, as well as personal products makers like Proctor & Gamble. One of his newest products is a rinsable dye “that will wash off your hands and most surfaces. When kids have a marker, they may write on the wall; the colorant we invented will rinse off completely.”

“Quality and service is how we compete — our technical know-how is surpassed by nobody,” Marrero said. During the recession, some customers cut back on spending, “but overall, with new customers and new products, we have stayed and grown these last three years.”